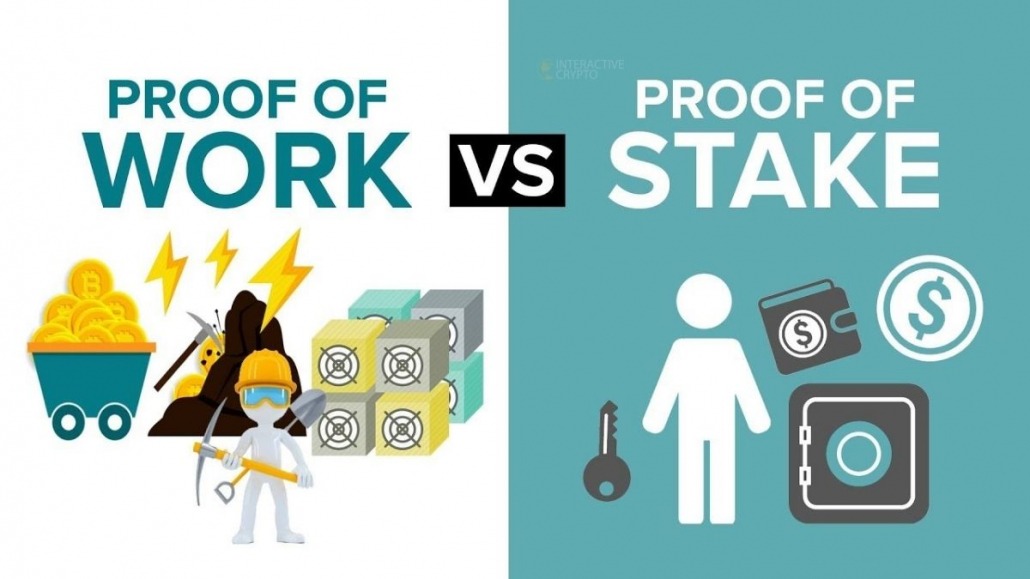 Proof of Stake Vs. Proof of Work

At the heart of every cryptocurrency is a network of computers that aids in the security of the program and governs the issuing of new units of supply.

This is referred to as a consensus mechanism.

Proof of Work (PoW) and Proof of Stake (PoS) are the two most often utilized consensus techniques, and they both govern how transactions between users are validated and added to a blockchain’s public ledger without the assistance of a central authority.

Understanding the distinctions might assist you in better evaluating available cryptocurrencies for your portfolio, as those that use Proof of Stake may have additional duties or benefits.

What exactly is Proof of Work (PoW)?

Proof of Work (PoW) was first used to combat email spam in the early 1990s.

The concept was that computers might be compelled to do some work before sending an email. This effort would be trivial for someone sending a genuine email, but sending mass emails would necessitate a significant amount of computing power and resources.

However, Satoshi Nakamoto, the developer of Bitcoin, was the first to apply the technology for use in a digital money system in Bitcoin’s white paper.

Ordering on the Blockchain

A blockchain is a method comprised of a series of blocks (groups of transactions) aligned in chronological order depending on transaction order.

The genesis block, also known as block 0, is the first block in a PoW blockchain and is hardcoded into its software. This block does not, by definition, refer to a prior block.

Following blocks added to the blockchain always refer to the preceding blocks and contain a copy of the full, updated ledger.

Through a competitive race in which some participants (miners) are encouraged to expend computational resources in order to submit legitimate blocks that fit the network’s regulations, PoW algorithms select who can change the ledger.

Then, nodes (any computer running the Bitcoin software) validate transactions, prevent double-spending (the act of sending the same coins to two different recipients), and decide whether proposed blocks should be added to the chain.

Miners on a PoW network compete against one other to solve complicated mathematical problems in a process known as hashing in order to create a new block. These riddles are difficult to solve, but the network should be able to verify the correct solution with ease.

Computational power is used with cryptography in a PoW protocol to achieve consensus and ensure the legitimacy of transactions recorded in the blockchain.

Miners compete to develop correct answers to mathematical problems during the hashing process in order to create new blocks.

Miners do this by guessing a series of pseudorandom numbers known as a hash. This, when coupled with the data provided in the block and run through a hash function computer, must yield a result that matches the protocol’s specified requirements.

The winning hash is then published to the network so that the other miners may determine whether the answer is correct or not. If it is correct, the block is added to the blockchain, and the miner receives the block reward.

The block reward is the new cryptocurrency paid to the miner by the blockchain for each valid and accepted block by the network.

Particular cryptocurrencies, such as Bitcoin, diminish the block reward after a certain number of blocks have been discovered.

This is done to maintain a finite and deflationary total money supply.

What exactly is Proof of Stake? (PoS)

Proof of Stake (PoS) is a variant of PoW that was created in 2012 to address its perceived reliance on energy usage as a mechanism of determining blockchain ordering.

Rather than relying on computers competing to generate the correct hash, the principle behind a PoS protocol is that participation is determined by coin supply ownership.

The PoS method selects a node (anyone who owns the coin) to propose the next block to the blockchain using a set of factors established by the protocol.

When a node is elected, its responsibility is to validate the transactions within the block, sign it, and submit the block to the network for validation.

Ordering on the Blockchain

A PoS blockchain, like a PoW blockchain, is a method that consists of a string of blocks that are aligned in chronological order depending on their transactions.

The initial block in a PoS blockchain is hardcoded into its software and is frequently referred to as the genesis block. Following blocks added to the blockchain always refer to the preceding blocks and contain a copy of the full, updated ledger.

It is worth noting that in PoS cryptocurrencies, there is no competition for who is chosen to add blocks. As a result, the blocks are frequently referred to as ‘forged’ or minted rather than mined.

PoS blockchains, unlike PoW blockchains, do not limit who can propose blocks based on energy use. PoS proponents frequently tout it as a “more efficient” technique, despite the fact that PoW miners have been known to use coal and other environmentally hazardous fuels.

However, PoW miners can utilize any energy source they want, including hydroelectric power, wind power, and other less wasteful kinds of energy.

Furthermore, PoS blockchains necessitate the usage of specialist gear (GPUs), which, like PoW mining equipment (ASICs) and other computing machines, necessitate the production of resources.

Users that want to be considered for adding blocks to a PoS blockchain must stake, or lock, a particular amount of the network’s money in a unique contract.

The number of coins staked impacts their chances of becoming the next block producer. In some circumstances, users that engage in malevolent behavior may be punished by losing their share.

PoS may involve various determining variables in order to not always benefit the wealthiest nodes. These can include how long a node has staked its currency as well as pure randomization.

The block reward in PoS, like the PoW method, refers to bitcoin granted by the blockchain to the user who submits a valid block.

However, because block selection is determined by coin ownership, exchanges may provide staking services that allow users to stake cash on their behalf in exchange for more frequent rewards.

Bitcoin mining, What exactly is it?

What is Ethereum (ETH)?
Scroll to top